Select an arbitrary range of dates in Microsoft SQL, which can be joined against data with date gaps using a LEFT OUTER JOIN on the date range table.

Posted by Verious at 3:48 PM No comments:

Following is an example connection string:

The syntax of the failover partner keyword is slightly different from one connection method to another:

Posted by Verious at 8:46 AM No comments:

Insert an identity into a table:

-- Create a gap in the identity values.
DELETE products
WHERE product = 'saw'
GO

Posted by Verious at 5:07 PM No comments:

Outlook Social Connectors bring all of your social networks into Microsoft Outlook.

Stay up-to-the-minute with the people in your networks by accessing everything from e-mail threads to status updates in one single, centralized view.

For anyone who is interested, RPGDX is holding a 48 hour Side-Scrolling Mini-RPG Summer 2009 Competition, which begins this Saturday, August 15, 2009. Anyone is welcome to participate.

I am currently reading Let the Galaxy Burn, a collection of short stories set in the Warhammer 40K universe.

Amazon describes the book as follows:

By popular demand, we've gathered up the best science fiction short stories ever written for the Black Library into one massive volume, and added some brand new tales! Warhammer 40,000 fans will be keen to get their hands on classic stories that have been unavailable for a while, and all readers will enjoy the range and variety on offer in this high-value volume.

The stories I have read so far have been very well written, action-packed, and highly descriptive. I strongly recommend this book for anyone who likes science fiction or Warhammer 40K.

Posted by Verious at 9:36 AM No comments:

I generally record shows using Windows Media Center in Windows Vista Ultimate and skip the commercials during playback, but this Sprint advertisement caught my eye:

Email ThisBlogThis!Share to TwitterShare to FacebookShare to Pinterest
Labels: Marketing

Walmart has lost my business and my respect

Last week Melissa and I purchased a piece of furniture and a DVD from Walmart. When we unpacked the furniture we could see it had been repackaged and had a large scratch on the front, which was disappointing since we believed we were buying a new, pristine piece of furniture. We then tried to play the DVD in three different DVD players, but were unsuccessful (I double checked the DVD to make sure the region was correct and tried other DVDs, which all played properly).

Today after work, Melissa and I went to Walmart to return the defective items. When we arrived, we loaded the furniture and DVD in a shopping cart and proceeded to the customer service  counter where after waiting in line, we had the pleasure of speaking with Nina, an extremely rude and unprofessional “customer service” representative. She informed us that we didn't have the necessary “yellow stickers” and could not return the items. In a condescending tone, she demanded we return to the entrance to get the stickers. We informed her there was no one at the entrance when we arrived, to which she replied in an extremely sarcastic tone, "There is always someone there!". She then mumbled something that sounded inappropriate and walked away, which left us standing at the customer service counter wondering if she was coming back.

After a few minutes I took the items back to the entrance and waited for the person who was supposed to be "watching" the door to finish flirting with a woman in the Subway restaurant (near the entrance). When Richard finally came over he said, "You must have stolen this because the box isn't cold." By this time, I was rather upset having just been accused of stealing the items in the cart (even though I had the receipt in my hand and several people had seen Melissa and I enter the store). I told him I was going to call the police and we could review the security tapes together if he didn't believe me. After several minutes of discussion another employee came over and told him to give me the stickers.

As a direct result of being treated so poorly, Melissa asked to speak with a manager. When the manager arrived, two strangers who were also waiting in the long customer service line took the opportunity to tell the manager about the situation and how poorly Melissa and I had been treated. When they finished telling him what they observed, the manager asked us to tell him what happened. During our entire conversation with the manager he did not make eye contact with Melissa or me, nor did he apologize for the employees’ inexcusable behavior or attempt to rectify the situation.

As a result of this debacle, Walmart has officially lost my business and more importantly, my respect.

This workbook contains one or more links that cannot be updated.

Depending on how the file was opened (either through the GUI or programmatically), the following message box may appear: 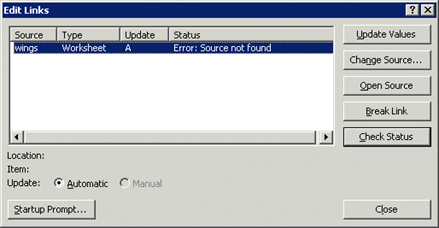 Selecting just about any option continues loading the file; however, if the files was accessed programmatically, user intervention is required through the GUI (even when the application has set Application.DisplayAlerts = false).

To disable the automatic update of Workbook links in Microsoft Excel 2007, which suppresses the prompt:

Posted by Verious at 5:05 PM No comments:

I was looking into visualizing numerical data and came across the following website:

Based on the visualization, it was interesting to see that the number of obese people in most U.S. states has approximately doubled since 1994. It was also interesting that the research does not take into account people who are underweight.

Email ThisBlogThis!Share to TwitterShare to FacebookShare to Pinterest
Labels: Development

Developing DHTML applications can be challenging, often the rendered HTML source code is dynamically assembled via JavaScript or AJAX and is dramatically different than the original source code of the Web page.

To view the raw rendered source code of an HTML page, save the following link as a bookmark, then navigate to the HTML page and click the bookmark.

To change the default port for Windows Remote Desktop:

Posted by Verious at 3:44 PM No comments:

Email ThisBlogThis!Share to TwitterShare to FacebookShare to Pinterest
Labels: IT, Windows

In Classic ASP, the Response.Redirect method causes the server to send a temporary redirect code (302) in the response header.

To send a permanent redirect code (301) in the response header, use the following code instead:

Replace "/new-page.asp" with the absolute or relative URL of the destination page.

Posted by Verious at 3:19 PM No comments: